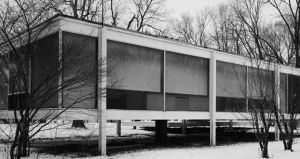 I didn’t have the 126th birthday of the late Modernist architectural pioneer Ludwig Mies van der Rohe marked on my calendar, but when Google saw it fit to remind me, I surely took notice. You see, one of Mies’ most famous creations, the Farnsworth House  stands near a river bank a mile or so south of my hometown.

In case you did not (or will not) watch the half-hour special featured in this post, the house was initially designed so minimally that the owner, Dr. Edith Farnsworth, of Chicago, complained that there wasn’t even a place in which to hang her clothes.

While living in a glass-walled house on a semi-remote stretch of riverbank, surrounded by twelve months of northern Illinois nature appeals to me, the philosophy behind the house is almost diametrically opposed to my stance on most things–most notably, web design.

In dealing with high-content websites, it has been my experience that form doesn’t scale gracefully. Even Google has had to deal with the demand for more content from time to time. There is always some new product or service that has to be featured. There is always another product that has become a irremovable fixture. There is always a shiny new trend or emerging practice to follow. As a designer and/or content manager of such sites, it falls on you to make your five-pound template hold ten pounds of content, and make it look like it was meant to do that all along.

Still, there’s a reason that we marvel over structures like the Farnsworth House and not, say, your nearest big box store.