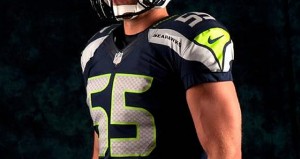 It is ridiculous the amount of juice the National Football League has. We’re not even halfway through the offseason, and the NFL has spent a good portion of it in the headlines. Andrew Luck, Robert Griffin III, Peyton Manning, Tim… somebody, Brandon Marshall, Sean Payton. But how do you know when an entertainment entity has a stranglehold on things? When a league-wide change to new uniforms steals at least a portion of most spotlights for a news cycle.

The league agreed to partner up with the little-mom-and-pop-shop-that-could, Nike, and that agreement includes a leaguewide makeover in uniforms. Add in a nation of fans terrified of/hopeful for the possible migration of the Oregon Ducks (their uniforms, of course)  into the NFL (including these fake monstrosities), and you have an improbable powderkeg of disproportional hype waiting to go off.

What happened? Not much really.

The league announced technical and physical to the jerseys, pants, pads–even the rope belts–but not much else. Most teams are making minor cosmetic changes. For example, the Chicago Bears have moved the TV numbers to the top of the shoulder pads and messed with the stripes a bit. The Panthers are rolling out a new logo and a unique addition, a message on the inside of the jersey collar.

Mercifully, however, Nike did manage to spruce up arguably the ugliest unis in the league, those of the Seattle Seahawks. Early last decade, they ditched their longtime blue, green, sliver and white duds for some true “duds:” a type of dark metallic teal with a bit of neon green trim. Sure it doesn’t sound so bad on paper, the team chose to wear dark muted teal helmets, dark muted teal jerseys, and dark muted teal pants. Seriously, one would watch a Seattle game and immediately want to watch the end of Old Yeller or Million Dollar Baby for a pick-me-up.

The Seahawks’ new garb tones it down a bit. The neon green is still there, but they morphed the teal into a bit more blue, and if they can somehow resist the urge to go blue, blue and blue (like they did in the introductory photo), it may actually look pretty good.

For those still concerned about Nike ruining everything, all I can offer is this. At least they won’t Maryland you, like Under Armour did.